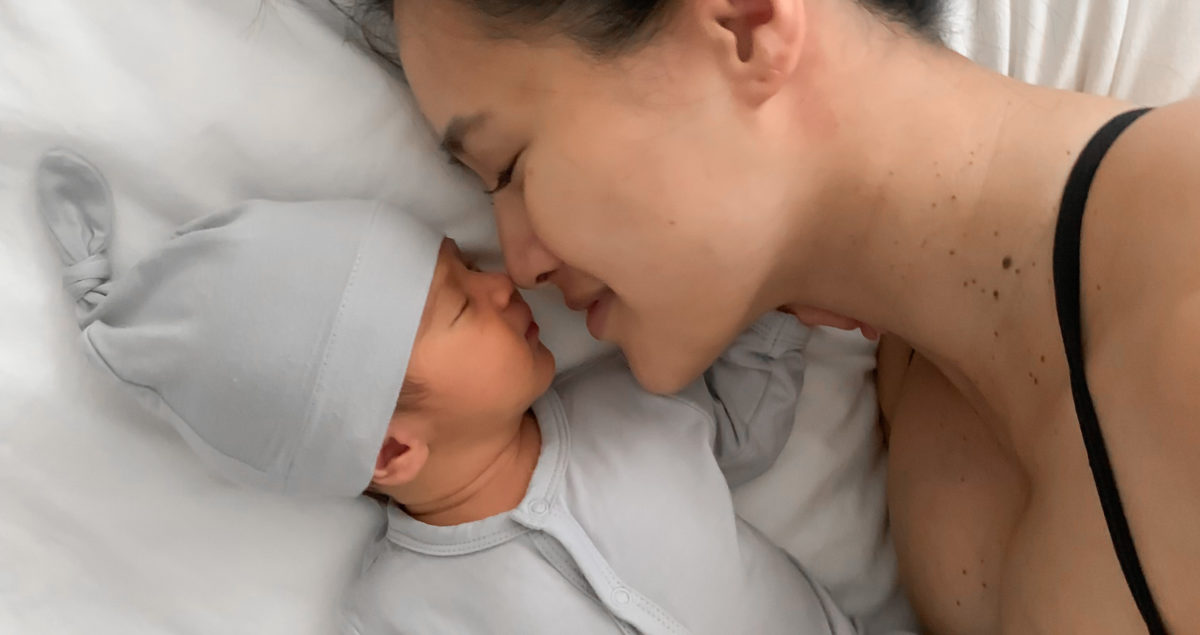 A couple of you have asked for my birth story so I thought I would share it in a post. I’ll try to keep it short so if there’s anything further you’d like to know, just comment below or DM me.

My labour was fast and furious. That’s how my midwife described it. She also told me that after my delivery she wanted to go home and drink a whole bottle of whisky. There’s some foreshadowing for you. Keep reading for the details.

7:45am: I woke up with some cramping, which I thought was just a stomach ache from something I had eaten the night before.

8:30am: Taylor woke up and I half joked to him that I wondered if my stomach aches were contractions.

8:45am: I went to the bathroom, and what did I see? My bloody show. Looks like I’m probably in labour after all! It was not like the movies – my water didn’t break dramatically or anything else like that. Of course we procrastinated, so we finally started to pack our hospital bag.

10:23am – 10:29am: I asked Taylor to call our midwife, and she told us we could come in and she would check us out. We had been warned that most women jump the gun, arrive to the hospital too early, and are told to go back home until labour progresses further. Well, we shall see.

10:54am: We arrived at hospital. I was in some serious pain on the car ride over. Upon arrival, I was given my initial assessment – I was 9.5 cm dilated. They were thoroughly surprised, but I can’t say I was. The intensity was definitely ramping on those contractions. Whoa, this definitely didn’t fit my TV-based pregnancy expectations, nor the typical birth timeline described in my prenatal class.

11:16am: I was wheeled to the delivery room where I started asking for drugs, but I was too far along for them to be administered. Just my luck.

11:27am – 1:17pm: I pushed and felt a rush of emotions. Everything from “I can do this, I want to meet my baby”, to sobbing and saying “I don’t think I can do it anymore” and everyone telling me to push longer and harder.

We were overwhelmed with so much joy, love, and happiness. It felt so surreal to be able to meet our baby!

10 minutes later, I birthed my placenta (which was apparently HUGE compared to others) and started hemorrhaging. I was quickly told I lost over half of my blood volume. Within minutes I went from just having my midwife and a nurse in my room, to being surrounded my more doctors and nurses and being poked and prodded from every direction. This was probably when I wished I had the epidural the most. I was then wheeled to the OR because they couldn’t stop the bleeding. The next thing I remember is waking up in another room and asking to hold Greyson. Taylor said it was very cute because the doctor said I had to be awake to hold him, and once I heard that I immediately opened my eyes all while still looking really drugged up, but with sheer determination to hold my baby.

So that’s about it! We stayed in the hospital for a few days because I lost so much blood, but we’re home now – happy and on the mend.

I saw the midwife the next day, and the first thing she said to me was “you gave me quite a scare yesterday”. Days later she told me how she went home that night wanting to drink a whole bottle of whiskey. So, I guess it’s safe to say that a home birth is out of the cards for me, and that I’m happy I was in the hands of some awesome doctors and midwives that acted quickly, allowing me to now be home safe with my little baby in my arms.